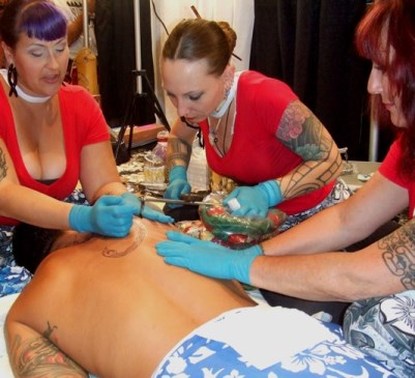 The word "tattoo" is a derivative of the ancient Polynesian word "tatau." After hearing native Samoans use "tatau" to describe markings on the skin, early exploring sailors had a hard time pronouncing the word, so it became "tattoo." Translated into English, it was originally believed to have meant "to tap," since the Polynesian tattoo was tapped into the skin. However, having spent time in the South Pacific, I learned that "tatau" actually translates to "what one must do."

Marking of the skin, called "tattooing," has been around since the beginning of man. It may have been Ug the Caveman who discovered the process by falling into the fire and getting poked with a charred stick or ember, which would have left a permanent pigmentation change on the area where it punctured his skin. He probably realized he could mark himself like an animal, camouflage himself, or make himself more attractive to females with such markings.

In indigenous cultures, tattooing has been traditionally used for identification with regard to tribal affiliation, sexual maturity, life experience, knowledge, wisdom, strength, endurance, rank, rites of passage, and beautification. In some cultures, tattoos were used to differentiate between kings, free men and women, servants or slaves, with permanent marks declaring cultural status in ancient societies. History shows that the more elaborate and beautiful the markings were, the more expensive in cost they were to obtain, the higher the social status of the individual was.

The oldest known tattooing implements were found in the coastal regions of Africa in a cave, carbon dated to be over 20,000 years old. As far as we know, the oldest practice of tattooing is found in the Samoan Islands, in the culture that came with the first people when they traveled to and settled the Islands of Samoa. Some designs were added when they landed on the Islands, resulting in traditional tattoos that the Samoan people still wear today. These tattoos are known for men as the Pe'a, and for women the Malu. It is a pure art form that has never ceased and has remained unchanged for over 5,000 years.

The tribes of the Americas, from Alaskans to Incas, Aztecs, Mayan, and Brazilians had many tattooing traditions. In Japan, they have an ongoing tattooing practice that has continued for hundreds of years. The Pictish people of Great Britain, the ancient Egyptians, Celts, Middle-Easterners, and even the Jewish all have an ancient tattooing history. There are many Polynesian and Micronesian cultures with tattooing traditions, including the Mauri of New Zealand, Tahitian, Marquesian, Hawaiian, Borneo, Yap, Philippine, Ponape, and others. Every culture and every people at some point in their histories have tattooed. Unfortunately, in many cultures they were forced to stop their practices upon colonization and have only recently started to revive their tattooing cultures.

As for modern tattooing, it has a 250-year history. At first tattooing was only for the rich and powerful, since only the rich could afford the travel to the South Pacific to be tattooed. But when sailors started their own form of tattooing and created the tattoo machine sometime in the late 1800s, the elite didn't want to be associated with what they considered lower class. Tattooing became associated with sailors, bikers, loose women, or side-show "freaks."

But tattooing has made a revival. In the last 20 years, more and more people have been wanting to be tattooed. At first they kept their tattoos hidden, held in secret and to themselves. But over time as it has become more accepted and tattoo publications and conventions have started, people have begun to feel less afraid to display their body art. Now there are even tv shows that center around tattoo shops and feature the stories of artists and clients. Every day, everywhere you look you can see doctors, lawyers, actors and actresses, rock stars, students, even grandmothers - people from all walks of life - with tattoos who show them with pride.

Tattoos have once again become a badge of honor.

Modern tattooing is only limited by the skill of the artist, and one's imagination. The tattoo work you can see today has become more and more elaborate, detailed, and beautiful - true works of art. To some folks, the bigger the better!