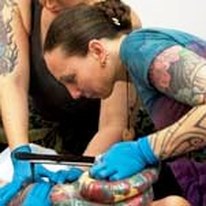 How I came to acquire my title and be recognized world wide as the first known woman in 5000 years to be trained in the ancient art for of Samoan Tatau (traditional hand-tap).
Let’s see now…

It began in the USA where I was a busy gal working in the tattoo industry. One lucky day I had the opportunity to meet and get to know Leo Zuluetta, a world renown tattoo artist famous for bringing tribal styles to the tattoo community and to the public, sky-rocketing its popularity. His art style is to this day very well liked.

At a social tattoo function I was courageous and approached Leo saying, "Excuse me, but are you Leo Zuluetta?" "Yes", he said. And we talked. That is how I met Leo, which was an intrinsic part of my history that brings me to where I am now.

While working at a shop that Leo had sold when he relocated to Michigan opening Spiral Tattoo, I had another wonderful opportunity to have many conversations and learn a lot about a very special man by the name of Sulu'ape Paulo. I learned that this was a man that tattooed in the unique Samoan hand-tap style that I had read about as a child, and been enlightened more about over the years. I had always associated with the tribal tattoo artists. And here I was talking with this man who I learned was a Chief and a member of an elite family where the hand-tap tattooing had been handed down through his family for over 5000 years!

Soon thereafter, a sad event of Sulu’ape Paulo passing suddenly prevented our meeting physically although we had come to know and grow fond of each other. His untimely death shook the tattoo industry, for he was famous throughout Europe and North America and known as the father of tribal tattooing.

As fate would have it, at a tattoo convention held in Tahiti in 2000, not only as the first tattoo celebration in 200 years allowed in Tahiti, but as a memorial to Su'a Sulu'ape Paulo, I was lucky enough to be there in person. I noticed, there stood the brother of Su'a Sulu’ape Paulo and I approached him.

"Excuse me, I am Angela, I am very sorry about the loss of your brother, Paulo. He was a good man. I have heard that you are the best traditional hand-tap tattoo artist in the world. May I sit and watch you work?"

He looked quizically at me and nodded “Yes”. So I sat, I watched, and I was moved... it was beautiful, astonishing and very breathtaking to watch. The patterns that flowed from his hand were astounding! I had never seen anything like this before. I had read about traditional hand-tap tattooing in National Geographic as a child...but I thought it was dead. I thought the only hand style left was the Japanese, when here it was, right in front of me being done by a genuine tattoo artist whose family WAS a true tribal tattooing family.

After several hours of watching and inadvertently helping, he took a break and then spoke. He introduced himself in heavy Samoan accented English as Su'a Sulu'ape Alaiva'a Petelo. This formal introduction became my direction.

Over a year, at several different conventions in Europe, I met up with Su'a Sulu’ape Alaiva'a Petelo and helped him any way I could. Although I had become a stretcher, I wanted to learn a lot more from him, such as how to hold the Sau Sau (mallet like tapping implement) and every other movement and position that seperated him from other artists.

One day back in New Zealand, I attended another convention, and spent as much time with Sua Sulu’ape Alaiva'a Petelo as possible. Later I was watching him as he finished up a tattoo, and was left alone with the tattooing tools that he had used. I found myself overwhelmed with curiosity, I reached out and took an au (invasive tattooing implement pronounced ow) into my hands. I picked up the Sau Sau, the way Su'a Sulu'ape Alaiva'a Patelo's experienced hands had held it with confidence and ease. All of a sudden a cold feeling crept down my spine sending a blood freezing shiver throughout my body, and I knew I was being watched. Slowly I turned my head, and there he was, Su'a Sulu'ape Alaiva'a Patelo.

There he stood, a powerful, stout Samoan standing in the doorway, leaning on the frame, arms crossed and peering down on me with an emotionless look on his face. I truly believed I had done something horribly wrong and that he would never forgive me. I gingerly put the tools down and let out a nervous pathetic laugh and said "uh, um... eh sorry"

He said nothing, and turned around walking away, not betraying at all what he was thinking or feeling at that moment. For two days I worried I had offended him, as he said nothing to me until taking me aside and he finally spoke.

"Angela, come here", Slowly, I looked up at him believing that I had offended him in some way.

He sighed deeply, slowly exhaling "Do you want to learn?"

"What?" I asked in momentary disbelief, stunned at what he had just asked.

At first I did not know how to respond, my mouth was so dry I barely could whisper " Why me? Why not a Polynesian woman?"

"Because you love everybody, and you cannot Ta'Pe'a (tattoo the Pe'a) and be a man hater. Your Mana (Energy) cannot be angry towards men, and change a boy into a man" he replied with a serious look on his face "Your Mana is good."

When I told Su'a Sulu'ape Alaiva'a Patelo I had thought that a woman couldn’t touch the tools because it was tabu, all he did was laugh.

That is how it all began, I packed everything up back home and flew to Samoa. I lived there for over a year learning the art, how to properly stretch, their customs, their ceremonies, and their ways. I also self taught myself half their language, I am still learning the language in hopes to learn all of it.

My teacher is Su'a Sulu'ape Alaiva'a Patelo, he is the top traditional Master Hand-Tap Tattoo Artist in the World. During this life changing adventure, my mom was my spiritual anchor and she supported my journey and everything that it entailed.

The person that I revere as my teacher and father is a very particular person, and to be chosen by him is an honor and it is history in the making. It meant everything to me to have someone recognize my potential and see it through and to allow me to be a pioneer in the world of traditional Tatau. I earned my first title of Sulu’ape by being his student and finishing my apprenticeship thus proving to myself that I have the heart to do this. I have been given the blessing to do all forms of tribal tattoo that I can do hand tap, and only limited by my heart. I am preparing to earn the additional title of Su'a showing my teacher I can tattoo with grace.
Big City Tattoo | 2913 University Avenue | San Diego, CA 92104 | 619.299.4868
Powered by