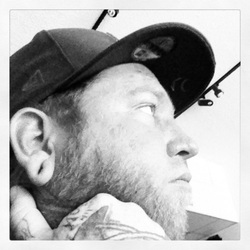 Marlin tattooed for several years until he got a seat in a shop on the East Coast in 2005. He traveled, worked, and was a guest tattoo artist in several other shops along the East Coast until he was offered the opportunity to work with Master Tattoo Artist Kinzie Bolson in 2007.

He took the first plane to San Diego for the chance to learn from a great old-school artist.

Marlin has been at Big City Tattoo ever since and is now the manager of the Big City crew. His specialty is Traditional Americana and he has a over a decade of experience. Please contact us or send him an email to schedule an appointment.