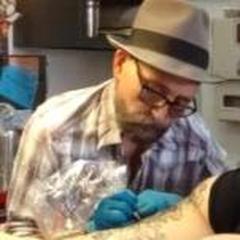 Kinzie began his career as a carpenter. One fateful day, he offered to build a new tattoo studio for his own tattoo artist, who wanted to relocate. The new studio was built with two work stations, but someone needed to be hired to work the second one. Kinzie asked his artist if he would consider hiring him, and soon became the first apprentice of Master Tattoo Artist Greg Skibo, eventually resulting in Kinzie being considered a Master Tattoo Artist himself.

A five-year apprenticeship with Greg provided the skills Kinzie needed to move forward and work for Doc Webb, on Old Broadway in San Diego. Soon after, Ron Howell (who had been taught to tattoo by Don Noland, now a close personal friend of Kinzie's) hired him; he worked for Ron for several years before opening his own studio in the same area.

Over the span of three decades, working under the auspices of some of the best artists, Kinzie was eventually entrusted to take his first apprentice.

Kinzie was set back by a serious motorcycle accident, suffering crippling hand injuries, but he persevered, eventually taking up where he left off.

A long line of talented artists and many years of experience have provided Kinzie with a concrete and extensive tattooing background, which provides him with a basis for his high quality artwork and the exceptional skill that other artists aspire to.
Big City Tattoo | 2913 University Avenue | San Diego, CA 92104 | 619.299.4868
Powered by