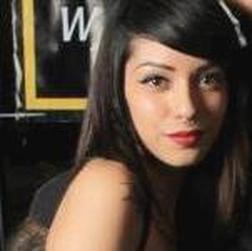 Originally I started out of high school to Junior College with a major in Nursing and a minor in Photography. I went down this path for six months, but it just didn't feel right -like it was for other people, but not myself.

I spoke to my tattoo artist at the time about my decision and he directed me to several shops. I asked about Big City Tattoo but he said to try others instead. I went to four different shops and finally found an entry-level apprenticeship at one of them.

At first it was fine, but a couple weeks in I knew it was going to be a problem. They treated me like I was lowest of the low (and worse). Having known a professional female tattoo artist, I knew that this was not the way it should be.

One lucky day I took my artwork and went to Big City Tattoo, and to my surprise, Kinzie was there. It was rare for him to be there since starting cancer treatment. He and I sat down and talked, then I showed him my artwork. He looked at me over the top of his glasses and said, "You start Tuesday."

He looked me right in the eye and, with a sincere look, said "I just want to let you know, you are an Apprentice, not a 'Shop Bitch.' We don't say that here. It is an honor to be an Apprentice."